At some point in 1986, at CKCU-FM here in Ottawa, I was tasked one day as a volunteer, to process the new arrivals for our library.  I ran across a cassette album in the pile of swag from Calgary, Alberta's Color Me Psycho called "Kiss Me, Then...Color Me Psycho".  In the listening room across from the on air studio, I slammed it into deck and proceeded to lose my mind!  TOP shelf, snarling, hard driving, brain baking,  Canadian punk rock influenced garage rock!  I immediately thought of England's The Damned as an influence and then thought it was right up there with other Canadian gems like Forgotten Rebels, Durango 95 / Purple Toads, UIC, etc.  I was gonna pump this fucker on my show "No Future Now" on it's next voyage!  I ended up nabbing a copy (which I still have btw) at either Records On Wheels or the Record Peddler in Toronto later that year while down that way to see a show (Alex Chilton perhaps?)  Color Me Psycho fucking RAWK!  The band waxed a second album in 1988 called "Pretend I'm Your Father" (also kick ass) and then later evolved into the stellar behemoth: Forbidden Dimension (also fucking RULED)!

2 weeks ago at 4 a.m. in the morning I saw a post by Jack Tieleman (Lance Rock Records/The Black Dot/ The Black Tie), and literally gasped!  A fucking vinyl version of "Kiss Me Then..." after 35 years !  Christ I had nearly given' up hope !  Here's the scoop...there only 200 copies...it will go fast!  I have a few available here in the shop,  as do others of course, somewhere and in the western part of our large nation, hit Jack up direct at The Black Tie https://www.facebook.com/The-Black-Tie114361483643543

"Yes Virginia, there is a Santa Claus..."  His name at this very moment is Jack Tieleman...😉💕👽 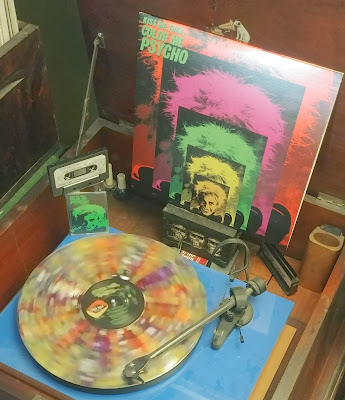