Here's a snippet of  "diatribe"...you'll have to buy the Cardinal Fuzz/Feeding Tube vinyl LP release this October to get the rest of the scoop ! 😉

Just after high school in 1978, I played in what was likely Fredericton, New Brunswick’s 1st new wave/punk  band called The Curbs.  We were playing all raved up covers of shit by Robert Palmer, Judas Priest, Max Webster, The Ramones, The Cars etc.  We played a handful of gigs over a two year period as I recall and had a lot of fun.  The Curbs consisted of myself (John Westhaver) on vocals, childhood friend, Geoff Graser on guitar, Dan Fleming on bass and Rick Thompson on drums.  Sadly we never recorded anything.  In late 1980 we played a gig called “The Sid Vicious Memorial Concert” At Memorial Hall on the campus of The University Of New Brunswick.  A band called The Vogons opened for us that evening.  I would a year or so later become for a short period of time the Vogons vocalist, but that’s another story.  This gig at MEM Hall would prove to be the last Curbs gig ever.  We ended the night with a 20 + minute rendition of the Talking Heads “Psycho Killer” and were joined on stage by Vogon’s leader Danny Silk and audience member Mark Carmody.  At a point the stage became a wresting ring with guitars being used playfully as “weapons” and I think Silk even bled after being crowned with an axe as the concert came to a tumultuous end. Carmody, Silk and I decided to form The Angered Wrecks a week later and drafted Curbs drummer Rick Thompson......

The vinyl version will be 300 copies and there is a SUPER LTD. Sam Giles LP Replica version on gatefold cover CDR which will also feature 6 bonus tracks! Cover design on both formats by Brother Brett Savage and music mastered by Chris Hardman! 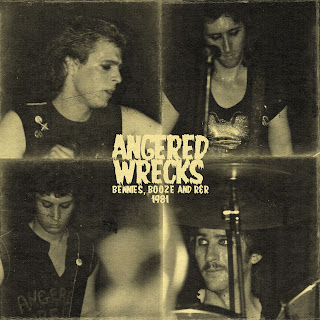 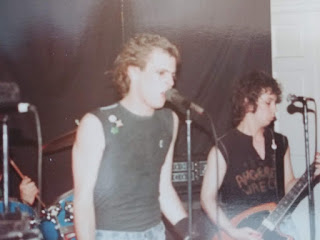 LOVE AND RESPECT AS ALWAYS TO THE CARDINAL : DAVE CAMBRIGE  R.A.F.R 💕