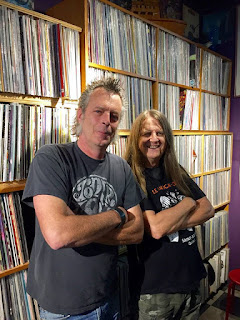 I discovered Canadian psych legends Christmas (Oshawa,ON) in 1978, if I remember correctly? I was stoked on the whacko cover of the bands 1st LP as I ran across it in a department store cut out bin in eastern Canada for $1.99.  Of course I bought it.  It really blew my mind as it was superbly "out there' by my then standards...it felt weed fueled if you catch my smoke ?  "Heritage" their 2nd LP,  came my way in the early 80's and seemed a powerful in yer face effort with a now 4 piece, playing more sonically HEAVY masterful psych rock, simply a blazer and a total mind fucker!  It dawned on me how surreal it seemed, that 2 -16 year old and 2- 18 year old long haired rocker's were capable of making such a well seasoned MONSTER record regarding how potent it was! ❤👽

It still boggles my mind!  Discovering pre-Christmas; Reign Ghost (2 killer LPs) in the early 80's was also a revelatory thing as that band, was easily as great as Jefferson Airplane from the same period!  AWESOME!  Roll the hands of time to 30 some years later 2017 and Bob Bryden is in my shop Birdman Sound!  I was thrilled to say the least to meet and hang out with Bob, who was as nice a dude as you'll ever meet!  I could go on here but, the reality is that Bob is a lifer and has way more in the tank than I have talked about above...Check out a whole ton more right here if inclined, you won't be disappointed.... https://www.discogs.com/artist/457870-Bob-Bryden

Bob wrote me awhile ago to tell me there's a new album coming out and in the "Chritsmas" vein!  Well I gotta say, after sitting through the test pressing twice now since yesterday, I am totally gobsmacked!  What a GREAT FUCKING RECORD!!!  Recorded in the early dayz of the pandemic last year, this is such a revelatory piece of work!  A fully realized psychedelic concept album executed with authority from a fella that still has a clear visionary approach after all these years and is not resting on any laurels whatsoever is a wonderful thing and I LOVE it!   This new trio dubbed Bob Bryden and Long Day Journey, featuring Rory Quinn and Kattie Iarocci may well have made one of the greatest and boldest musical rock statements of the millennium here in Canada and it stands easily toe to toe with anyone on the global landscape.  You can hear more and read more about it below in the following links and I URGE you to check it out!  Greatest LOVE and Respect to you Bob for sticking to your guns...simply wonderful and thank you for putting this in our lives "Love In The Atomic Age" (2 x LP set) is a KILLER!  {:>)))) 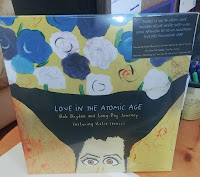