TBT...Tripping With Damo Suzuki and The Band Whose Name Is A Symbol 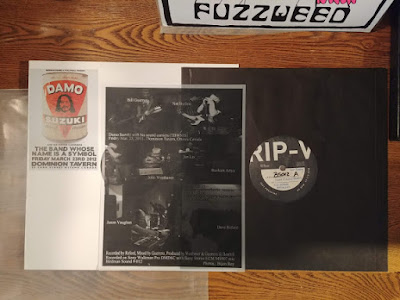 We were more than excited near the tail end of 2011, when our dear late friend "Lady" Mary Mackinnon said she had spoken with legendary CAN vocalist Damo Suzuki and he was very keen to come play some shows including one in Ottawa. It was like a dream come true to actually play behind someone you had been a die hard fan of for many decades !   We organized the show and waited for this day in March the following year to come around.  The Dominion Tavern show was a BLAST and totally sold out!  We had arranged to have the show recorded 2 different ways and a 3rd by TBWNIS guitarist Dave Reford to cassette would be for archival backup.  The 2 board recordings weirdly "shit the bed"...ghost in the machine ?  Luckily Reford's Sony Walkman Pro saved all from being lost! The cassette (s) were given to Bill Guerrero and he and I created this 44 minute document of what would turn out to be our 1st journey of  3 trips with Damo , over the next couple of years !!  We still feel very honoured to have been involved with this truly legendary dude!

The LP (the 5th from TBWNIS) of this event, was released on Birdman Sound Records as a ltd. pressing of 100 copies and is long sold out.  Seems to be in demand somewhat as of late, as many fans of the Symbol missed out on getting a copy!  The last time it was for sale on discogs it sold for $ 135. Currently there are none listed !

Would be super cool to see this repressed but expanded, as the original LP contains 44 minutes of the set which was 133 minutes in total !!  Who knows if this will happen...? 👽

https://thebandwhosenameisasymbol.bandcamp.com/album/damo-suzuki-tbwnis-live-2012
Posted by The Birdman at 6:41 AM