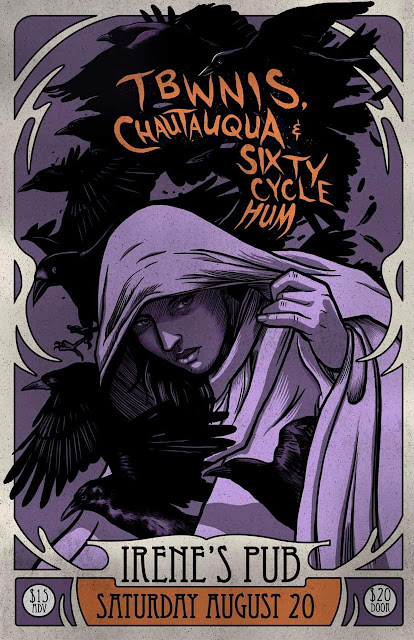 The Band Whose Name Is A Symbol play their first public LIVE Show since November of 2019.  What a long strange trip it's been...

The last TBWNIS show was at The Dominion Tavern in November of 2019, playing in front of a packed house with Frankie & The Witch Fingers.  Looking towards the spring of 2020, there were shows with Acid Mothers Temple and the bands 4th trip with the legenadry Damo Suzuki.  A rumoured set with Follakzoid was also in the shadows.

Then the pandemic happened and that was that!

Since January of 2020, their have been no shortage of TBWNIS music released however so that has kept fans happy and garned new one's as well!  Berserkir Vol. I and Berserkir Vol. II each saw light of day on 3 physical formats. A split album with nanaimo heavies Anunnaki was also issued on LP/CD and Cassette.  In March of 2020 3 days into total lockdown the band quickly began work in isolation on an album entitled "Unsemble" which is arguably the bands most diverse work and also saw issuance on LP/CD and Cassette.  Stellar Remnant: a LIVE LP was released in 2021 on LP and CD. This album was recorded in June of 2020 Live in the empty shell of the Birdman Sound locatuion in downtown Ottawa to commemorate the closing of the shop.  A 4 CD set entitled "Shedding Of The Albatross" and "In Space We Trust" (CD/Cassette) albums were also released in 2021.  "Ensemble 8/3/2016" appeared on LP and CD in early 2022.  Two ltd. issue cassettes, "Friday, March 23rd, 2010, Dominion "Tavern" appeared in 2020 and most recently in 2022 "Biker Smell".  Both tapes on Feeding Tube Records from the USA.

TBWNIS played together privately in September of 2021 outdoors in Richmond, Ontario for the 1st time since June 27th, 2020.  This fully improvised LIVE set was titled "474 Days Later" and was captured on video and audio by friend Wayne Coulis who hosted the band at his estate. This recording will be released in physical format at some point!  Most recently a private LIVE set was performed with additional personnel on May 14th, 2022 (also at Wayne's in Richmond).  22 minutes of this fully improvised set will appear on a split album with Manchester, UK's Dead Sea Apes later this year on the mighty UK imprint Cardinal Fuzz !

TBWNIS have seen the release of 32 albums in phyical and many more digital only albums.  Check out their bandcamp and discogs pages.  Google them for many years of reviews, videos on Youtube and Vimeo.  Go see the show at Irene's in near a months time and say hello...TBWNIS will take you on a trip to somewhere...rest assured ! 👽