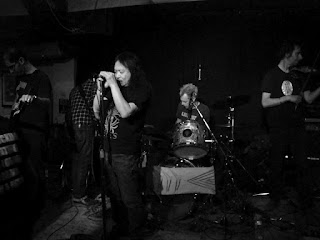 We had a blast on Friday night at the Dominion playing behind Damo Suzuki in a sold out performance. It was an honor to say the least. Damo is the ultimate cosmic traveller and a super swell character. The collaboration came off so naturally it was like we had done this before. Right from the first moment of soundcheck, it became apparent that with nothing spoken regarding the music to be played that evening together, that the whole affair about to unfold could be magical.

Damo Suzuki and TBWNIS.... I hope Suzuki remembers this gig - it must surely rank among his finest encounters with a network of unknown "sound carriers". I was simply blown away by the way the set took off. It was like a 747. I didn't expect Suzuki to sound like some grizzled bluesman either, and the effect was captivating. I hope the band is happy for and proud of what you pulled off...! A magnificent set, an incredible vibe, and a good meeting of minds.
See you soon,
Inderbir

Great gig, or at least it seemed that way from the audience! I hope you guys had a blast, too! Thanks for the terrific show and for making it happen!

Other than suffering from a Suzuki hangover (which is a good thing)....I have to say John your band was amazing last night! You all should be very proud to have pulled off such an amazing show!.......Derek Bradshaw


As I said we had a blast and for literally 2 1/2 hours! We recorded the show and it was also captured on video. Hopefully we can put this together for an LP release by mid summer. Eric will have something on VIMEO soon so I'll keep ya'll posted on these matters.

Many thanks to the Dominion Tavern (Al and the staff), Mary Mackinnon, Eric Larock, Mike Caffery,S.O.A.P.,Dave Aardvark, Ben Armstrong and the great crowd that supported and attended this event. The photo above was taken by Bijon Roy.
Posted by The Birdman at 4:26 AM