IN ACTION...The Band Whose Name Is A Symbol 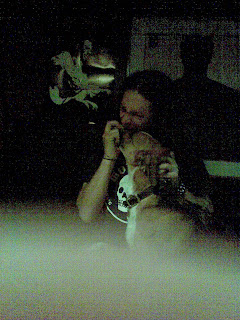 Carlangas are Montreal based but feature members of Castor from the Chelsea, Quebec area. Lead by Charlie Brooks, Carlangas have 4 albums to their credit including their latest entitled "Soul Stalker" released in December of 2010. Carlangas have recently sold a song called "Condor Eyes" which will be featured in an episode of the Showtime hit TV series "United States Of Tara".

TBWNIS have 2 new albums enroute. "TBWNIS vs. The Purveyors Of Conspicuous
Authenticity" & "Stupidity Helmet". Both recordings will be ltd. run vinyl LP's of 100 copies each. Live action Feb 12th is $5.00 @ the door & festivities kick at 10 pm.
Posted by The Birdman at 12:31 PM

Hi,
I am very interested in getting some TBWNIAS LP's straight from the source... can you email me at theuntouchablesound at gmail dot com?