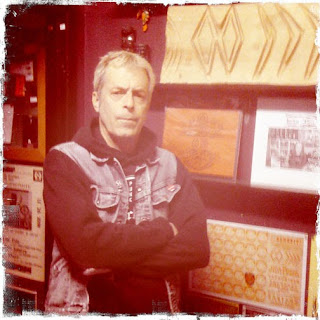 As we're into another year I'll take the opportunity to share some thoughts with those of you might read this. Birdman Sound is officially 20 years old as the physical existence of the shop began on August 1st in 1991(mail order in 1988). Having gone through at the very least, 15+ pairs of Converse high tops during this period (just got a new pair a coupla week's ago)it dawn's on me that a "20 year address" is in order. Way back in the 60's when I was bangin' a stainless steel pot with a wooden spoon, my path was pretty clear. By the time I was 7 I already had a record collection. As a little kid I spent a lot of time playin' with toy soldiers, blowin' shit up (something frowned upon today!) and creating battle scenarios to the vinyl sounds of CCR, Lighthouse, Iron Butterfly, Alice Cooper, Mountain and Frijid Pink. The color purple was the total shit for me in 1968(same purple the shop is today!) and Nag Champa was ingrained in the nose hairs and my entire record collection to this day is still incense permeated! Having spent my entire early teens hunting records down wherever they existed and occasionally flipping them in the quest for more, the course had been charted and not much has changed in that respect. Aside from runnin' through the con's I've retailed records now for 32 +years, owned more records than most of you could ever dream of, buried 20 some cats a number of dogs and drank more Keiths beer than just about anyone on the planet. To date since Birdman opened I've shelled out close to $ 325,000.00 just to keep a retail roof over my head. I won't bore you with the rest of the exorbitant financial overhead in running this shop for 2 decades, but suffice to say it's an exercise in "cluster-fuckery" of the highest order!! All this has been done while selling absolutely zero mainstream music!! Have I paid a toll? You fuckin' bet I have! Luckily though at the end of the day the greatest satisfaction has sweet F.A. to do with $$$, cuz... it's all about the music. I feel privileged beyond belief to have led the life I have so far (THANK YOU CAROL!). I listen to awesome music 6 days a week, play in yet another great band: TBWNIS (even if you don't know it) and I’ve continued to plunder the airwaves for over 30 years by way of community radio programming (the show for the past 22 years is on CKCU-FM 93.1 / www.ckcufm.com every Friday at 9:30 AM and for awhile now has been known as "Friday Morning Cartunes"…what a privilege!). I know I'm goin' somewhere with all this but as the human attention span is pathetically short , I'll cut to the chase.... I pledge to push the "word" on tunes till the day I die. It will eventually be the case though, as I am thoroughly fucking sick of payin' the piper to have an albatross with a death grip tied securely round my neck, that Birdman Sound "the location"(albatross around neck) on Bank Street, meets Armageddon on June 1st 2012, (providing the Mayan predictions don't beat me to the punch!) Sad as it may seem and believe me, I will miss the store atmosphere, the floor and the ceiling have grown far to close for comfort if you know what I mean! Here's the deal...after the shop is gone, I will still continue to provide you and yours with the goods (home delivery will become our specialty). A new secure on line website will go into operation this year(later), the blog, radio show, record conventions and live music promotion will continue. Birdman Sound will go vehicular and you will see us at shows and wherever, pushin' the rawk to the man wherever it may take us. 2011... NOW... until June 2012 Birdman needs your continued support so make sure you come by regularly so the rock continues to roll, send me emails so I can start keeping the database for intergalactic contact and may the force be with you all. RAFR... John
Posted by The Birdman at 8:08 AM