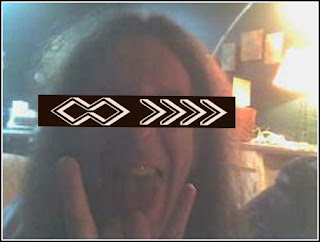 Playing Current 93, Hills and the first Ash Ra Tempel LP at the same time produces an astounding sound collage...the soundtrack to my existence at this moment in time! "the band whose name is a symbol" are in the process of looking at/listening to, an enormous amount of recording that will culminate with the release of "Biker Smell" in the coming new year. Alternately titled "Pantheon Of Fuckery" the album will be "created" in the spirit of the aforementioned spontaneous mix which occured moments ago. I can only say that I think our next record will be a great listen for anyone with discerning musical inclination. The gal that will adorn the LP jacket will be annoyed and flattered in the same breath, but really, she brought it on herself and in the end it may well be her "5 Minutes of fame".

On another note... next week I will post, for you here, some and only some of my favourite records of the year....this will not include records I have not yet received in 2009 which will mean that the list will be updated every so often until the end of December. I am also working on a list of "best" reissues for 2009 which has become a laborious task given the magnitude of wicked items to consider.....so much music...so little time....!
Posted by The Birdman at 11:58 AM