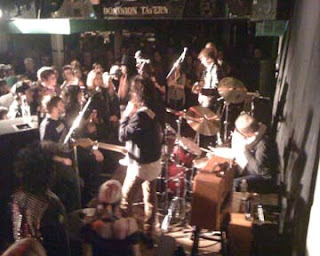 It was probably last April or May when Paul Fenton rang me to ask if I would handle a reunion show for the fabled Canadian punk rock band the Action. As a fan of the quintet's minimal recording legacy and never having seen them perform (last gig 30 years ago) I jumped at the chance to be involved. Not wanting to put the cart before the horse we spent most of the last 5 months or so doing a minimal amount of "word of mouth" promotion and then of course the media hit hard and did the rest in the 2 weeks prior to this past weekend's spectacle. Despite some naysayer bullshit leading up to the big event I can safely say that the Dominion Tavern set a damn good stage for the triumphant return of one of Canada's 1st Punk Rock outfits...The fucking ACTION were GREAT!!!! Falling tightly between late 60's era Stones and Johnny Thunders and the Heartbreakers the guys were on top of their game...rawk solid, tight, pro playing, stage presence and a 10 outta 10 rock quotient! The response was awesome(kinda brought a tear to the eye if ya know what I mean?) The White Wires on Saturday and the Suppositories on Sunday were both killer, justifying why I asked them to play with the legends and their forefathers to begin with...thanks guys and girls!! I would just like to say thanks as well to Peter Simpson at the Citizen and to Bill Guerrero at CKCU and Aardvark at CHUO for spearheading the radio spots and of course to everyone else for helping with the push for the ACTION. To Paul, Michael, John, Scott and Ted I would like to say congratulations gentlemen you guys fuckin' RULE and I don't think anyone who witnessed one or both shows will ever forget them! Looking forward to your future...Thanks again! (above photo : Stephanie Kepman)
Posted by The Birdman at 9:41 AM