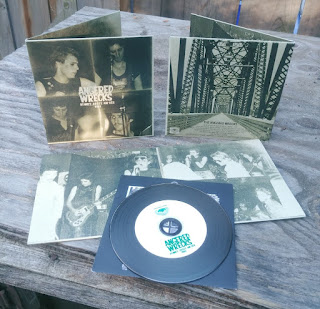 Exactly 40 years ago one drunken, speed fuelled evening in eastern Canada, The Angered Wrecks were born.  We existed for somewhere between 12-18 months. We played a number of house shows and a couple of bigger venue gigs. We lived the life of Riley and I'm shocked in many ways we survived the intake of legal and illegal substances upon reflection. There are only a couple of people who might read this post that were present during this heady time. The Wrecks (not by any stretch the first band I was in), were the group that would be the foundational jumping point for my continued participation in bands to this very day. There is nothing new or radical here by today's standards, or even then for that matter. The Angered Wrecks in that moment though, were like the brightest and most dangerous flame that had ever been lit in our tiny nearly non-existent scene.

This is taken from the insert included with the vinyl version which releases in early November 2021 on Cardinal Fuzz and Feeding Tube Records...

"Just after high school in 1978, I played in what was likely Fredericton, New Brunswick’s 1st new wave/punk band called The Curbs.  We were playing all raved up covers of shit by Robert Palmer, Judas Priest, Max Webster, The Ramones, The Cars etc.  We played a handful of gigs over a two year period as I recall and had a lot of fun.  The Curbs consisted of myself on vocals, childhood friend, Geoff Graser on guitar, Dan Fleming on bass and Rick Thompson on drums.  Sadly we never recorded anything.  In late 1980 we played a gig called “The Sid Vicious Memorial Concert” At Memorial Hall on the campus of The University Of New Brunswick.  A band called The Vogons opened for us that evening.  I would a year or so later become for a short period of time the Vogons vocalist, but that’s another story.  This gig at MEM Hall would prove to be the last Curbs gig ever.  We ended the night with a 20 + minute rendition of the Talking Heads “Psycho Killer” and were joined on stage by Vogon’s leader Danny Silk and audience member Mark Carmody.  At a point the stage became a wresting ring with guitars being used playfully as “weapons” and I think Silk even bled after being crowned with an axe as the concert came to a tumultuous end. Carmody, Silk and I decided to form The Angered Wrecks a week later and drafted Curbs drummer Rick Thompson.

We began rehearsing at an old “salt box” style house on Westmorland Street (later dubbed “The Bug Shack”)  in the fall of 1980 across from the old St. Anne’s Anglican Church (where pr-teen me served as an Alter boy, sung in the only male choir in New Brunswick at the time and went to sea scouts).  We partied pretty hard there over the winter and rehearsed in the front room ground floor with zero heat in the winter.  I recall vividly dressed for the outdoors while blasting away, in a cloud of constant icy breath. Somebody coming to hear us rehearse, a sort of audition to for a potential gig thought we were insane playing in sub zero temperatures! The only source of heat in the entire house was from a pottery kiln at the very back ground floor which was engaged to heat the 2nd level space where we all hung out when not playing.  A large circle was cut in the floor so that the rising heat would get up top faster…kind of surreal, but pretty guerrilla style for our small punk rock scene at the time, so it was cool by the same token.

In early spring of ’81, Mark, Danny and I moved into an old Victorian style house on Charlotte Street in the downtown area.  I was freshly unemployed and drawing U.I. after Sam the Record Man closed doors, Danny worked on the north side of town as a bread baker and Carmody  repaired and refurbished guitars at Tony’s Music Box.  We set up a permanent rehearsal space on the main floor taking up the dining room and living room area with a full P.A. system.  A long party began.  We rehearsed a few nights every week and the house became a hangout for friends and acquaintances, many of whom would just show up often unannounced.  Canadian jazz vocalists Holly Cole was a regular fixture in our digs.  We often had strippers hanging out and partying as they resided across the street when on tour and would come over after their gigs finished at the strip club up on Prospect Street. The choice house “poison” became Purple Jesus; a righteous concoction of Alcool (94%) and Allen’s grape juice!  We always had beer, weed and often speed, which on occasion we’d get from trucker’s up the TransCanada highway a truck stops.  Stereos were always blasting from the upstairs bedrooms, The Doors, Pistols, Zappa, Sir Lord Baltimore, DK’s, Damnation Of Adam Blessing and everything else under the sun…and it was like a nonstop party coupled visits by local law enforcement.    We existed on hot dogs and grilled cheese sandwiches , pizza and takeout burgers and fries from the legendary BBQ Barn just on the east side of Magic Forest a few blocks away.  Gigs would happen mainly at 2 different locations, which we dubbed as punk parties: Horsnell’s Foundry on King St. and at The Bug Shack. These shows were loads of fun.  All of our recordings were done live off the floor with one cardioid mic taped to the ceiling to capture the entire room sound and straight into a cheap Alpine cassette deck.  We did a bunch of sessions to tape and sadly lost an entire 90 minutes worth of material that we recorded shortly before we broke up.  That last session had crazy re-workings of Pink Floyd songs, Stones, AC DC, etc.  I have anguished over the loss of that one master since discovering it missing in 1983.  I last saw it in my drawer at Magic Forest Music Store I think!

The last show we ever played was in the fall of ’81 at the Bug Shack after the household was served an eviction noticed with the house to be entirely demolished.  We got a gig together the weekend before demolition, packed the bottom floor and played a blazing set.  At the very end, walls were kicked apart, old cans of paint strewn about, general wanton destruction to furniture, doors, windows etc…insane.  The bug shack had come to an end and shortly thereafter, The Angered Wrecks.  Our own rented house split up and I moved back in with my folks for the winter.  I began singing with the Vogons which was Danny’s band with Dave Maskill and Chris Saad.  Carmody went off on his own and in reality, I think, plotting the earliest incarnation of what would become the long running collective known as The Exploding Meet. This too is another chapter…"