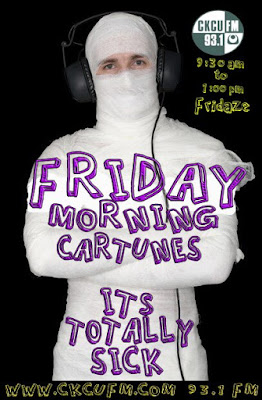 This picture represents the last program I hosted on March 13th, 2020.  Lucky 13 be damned eh?  28 weeks of pre-programmed swill (for the most part), has been playing during my time slot from 9:30 am - 1:00 pm. I  have had fuck all to do with the crap that has been airing during my absence!  I opted out from being involved in doing a show remotely and "phoning" it in so to say, as a number of show hosts are doing. I have neither the proper gear, nor any interest at all in throwing down a bunch of downloaded digital junk and spewing that out over the airwaves disguised as a radio program .  I'm pretty old school and that is not what or who I am with regard to programming, so fucking sue me!

I have hosted programs on Community radio now for 40 years starting at CHSR FM in Fredericton NB and then in 1985 at CKCU-FM here in Ottawa plus 2 years simultaneously at the Algonquin College radio station (pre-FM).  At CKCU I have been Music Director, Program Director as well as Show Host for "No Future Now", Co-Host for both "Meltdown" and "New Revolutions" and several different general music programs.  Since 1988 when I took over Friday mornings and "Friday Morning Cartunes" was born.  In late March my friend Wayne Coulis asked if I'd be into doing FMC on Facebook and I said yes of course!  That has been so much fun despite constant warnings from FB regarding copyright infringement (go fuck yourself fb!).  Wayne and I turned it into a near daytime soap with KILLER visuals (thanks Wayne), live doggos (Hefe and Lebowski), on air drinking of local micro brews ever week with reviews, lots of foul language, political commentary and loads of great records spinning! The audience participation was AWESOME as well{:>))))  This too is coming to an end though, as FB, commencing October 1st, are enforcing very strict rules to curtail such "disrespectful and brash fun!💀  One may be banned for life from FB regarding the spinning of music and ignoring the copyright infringement shit.  Fun killers indeed!  I will figure out another way to program soon I hope, but for now, there will be "radio silence".

There is NO word at present on when we will get back into the CKCU studios.  The CKCU annual funding drive is coming up at the end of October (seriously??)  Just for the record, FMC listeners in the previous 4 years donated over $ 22, 000. in pledges because of the music they got on the show, week in and week out for decades. Friday Morning Cartunes has also been the # 1 "On Demand" program 7 out of the last 8 years! I find it fucking pathetic that some of us have not been allowed to do our programs (a number of other DJ's feel the same as I do btw!) .  I would have had zero issues doing my program at the station since lockdown started the week after my last show!  Ironically the last 5 years it has been on a rare occasion that there has been anymore than 2-3 of us in the entire station while my show is on and in fact many weeks, I neither saw nor spoke to anyone in person for the duration of the show!  Hand sanitizer was installed in the place after SARS (remember that one)?  Anyway, thanks to Wayne Coulis and his family for hosting me and being a great co-host on Friday Morning Cartunes Facebook version and I'm being honest, way more fun than the conventional method! Will I ever return to the airwaves to physically spin records on Friday mornings ?  Who the fuck knows?  Am I concerned...fuck no...anyways... be well out there!

Currently at this very moment I am listening to a ZOOM meeting from CKCU regarding funding drive and in my opinion, continuing to do my program, makes no sense any longer...there is NO underground or rebel spirit left...CKCU is now just conforming to fit the times and my skin crawls with the lack of historical perspective...👽