The Band Whose Name Is A Symbol....Upcoming Gig.... 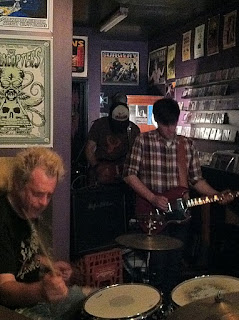 TBWNIS will play Kaffe 1870, Wakefield Quebec, Saturday, September 17th. The group is joined by Hollow Bodies whom they shared the venue with back in the spring. This set will be the first without founding member Mark Alexander McIntyre (Bass), who has departed the region for what the rest of the group hopes to be "greener pastures". I would like to take this time to wish Mark the best in future endeavours and to say that we miss you as a friend and bandmate already! We (Mark included) collectively decided not to bring any "outsiders" into TBWNIS but instead look inward. Nathaniel and Bill who are both wicked bass players (and let's not even mention Mr. Reford)will be switching off on bass and some great new material; "The Circus Has Left Town" is already in full balls out "go mode".

Bill this week, presented us the preliminary mix on a session we recorded last month at Bearhill with the original 4-piece group which appeared on "Superficial Marks" and all I can say is "the fucker RAWKS"!! It's TBWNIS in punk-psych mode....! We will do something with this soon. Our new record which will be out in the fall, "Punks, Twats and Urban Cowboys", has been greeted with major enthusiasm by those that have heard the finished master. It features 6 new compositions recorded live in one take with nothing added to it whatsoever! It plays the same way as our 3rd oop record "Biker Smell", as in, 2 side long excursions into psychedelic skull-fuckery... it freaking kills.....the best yet!! There's even singing on the opening track by Hesham (Oud) who will be back from Kuwait in time for our show at the Kaffe. Okay...enough of this breast beating! Let's just say we all hope to see you soon...RAFR !
Posted by The Birdman at 7:52 PM