TOTAL SMOKE...THE BAND WHOSE NAME IS A SYMBOL 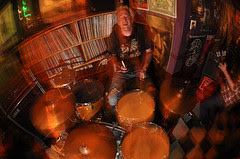 We had a blast Saturday night at Birdman Sound, as part of the "Ottawa Explosion". The inaugural set by Matt Oxley's new outfit Human Being was just dandy, and despite being together for only a few weeks they turned in a raw, edgy and inspirational(short)set. We will play with them again, Yeah Hup! A solid crowd turned up with brews in tow and I must say I wish now I'd done more live shows in the store cuz it's a way wicked environment, it kinda seeths and spits the RAWK. TBWNIS was stripped to a six piece on this occassion as our oud player Hesham is at home in Kuwait for the summer and our violinist Jan, resides in the bush way outta town and had mucho car issues and could not make it. Both were missed, however as periodically has been known to happen, we have rehearsed the odd time as only a 3 piece and no matter who comes to the fucking parade we will always deliver! We twigged the set to "smoke" style and likely played a more "in yer face" show, more akin to what we did 3 or so years back. We had fun and the humans in attendance seemed to "get it". Thanks for comin'! For proof of the existence of the show, Andrew Carver took some WICKED pics which you can view by checking out this link....

Me, Jason, Mark and Bill spent 4 hours yesterday, post show, putting together our next 2 LP's.....one working title is "Ladies Cheese Making Atellier" (don't ask...) Both these new albums kick ass and hopefully 1 will be out in time for the Birdman Sound 20th Anniversary on August 5th or 6th. We will be playing a show to commemorate that event and more on that later. Not sure coming up which Thursday yet, but we'll also freak the tourists out as we we're gonna play a free outdoor show at the National Gallery in the "Spider Pit" in late July or early August. Maybe you can pay close attention to this blog (as in watch for the date at the gallery once set) and come see a free show instead of getting sucked into the "Ottawa vortex of overated, way to expensive, every weekend's a fuckin' excuse for a festival depression", which seems now to be the sign of summer every year here now. By my estimation, this is far more ho hum than the never ending road construction that historically has defined Fat Cat city.

On an entirely different note, I just gotta say that The Starfuckers album
(just out on Holy Mountain)kicked my ass right up over my shoulder (and made my tired back feel better) !!! Geez Louise, how did I miss that mother 20 years ago...YOWZA!
Posted by The Birdman at 6:11 PM